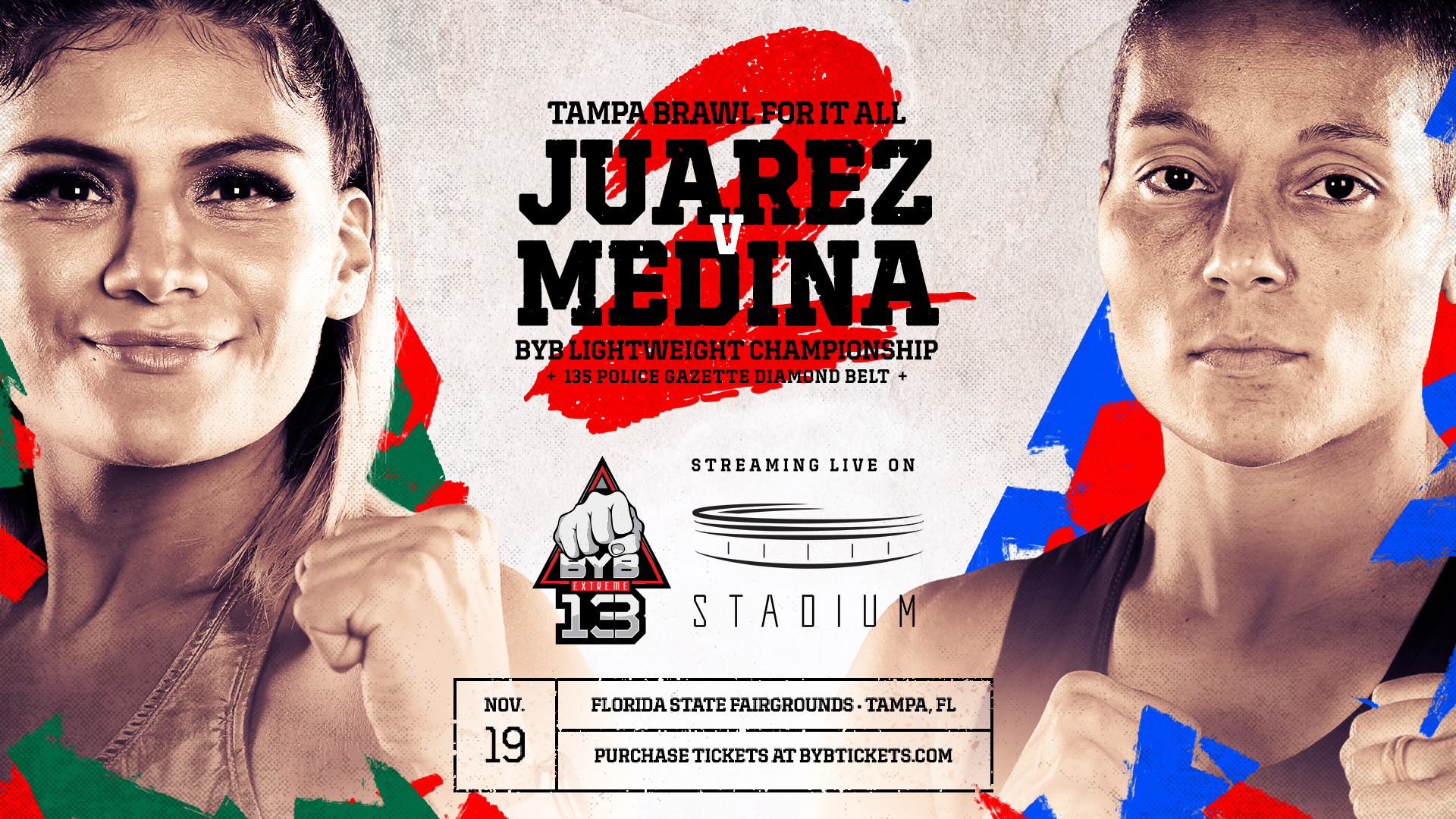 BYB Announces Three Title Fights to Headline BYB 13: Tampa Brawl for it All on Saturday, November 19 at the Florida State Fairgrounds

BYB’s Desmond Green to take on BKB’s Scott McHugh for both the BYB Middleweight title and the Police Gazette World Diamond Belt.

Tony Lopez, undefeated in the Trigon, makes his first heavyweight title defense as he takes on challenger DJ Linderman.

Miami, FL – BYB Extreme Fighting Series matchmaker Mel Valenzuela announced today that three premier matchups will headline November 19’s BYB 13: Tampa Brawl for it All card at the Florida State Fairgrounds. The event will be broadcast live and exclusively on the Stadium App and WatchStadium.com, with prime time, multi-night replays to air on Stadium’s over the top (OTT) and over the air (OTA) platforms.

BYB’s Desmond Green will take on BKB’s Scott McHugh for both the BYB Middleweight title and the Police Gazette World Diamond Belt.  McHugh, a BKB champion, would hold three world titles should he emerge victorious from the Mighty Trigon. The undefeated Green was scheduled to compete for the title at BYB 11 Brawl in Doral, but a mysterious, last-minute injury forced his opponent to withdraw.

“Things have a way of working themselves out,” said Valenzuela. “By being forced to postpone our inaugural Middleweight title fight, we were able to secure perhaps one of the most anticipated matchups in bare knuckle history with two of the best middleweights from either side of the Atlantic.”

“Paty is a true champion, unafraid to defend her title against all comers, and Monica pushed her limits in their first contest.  Monica earned the rematch, and kudos to Paty for continuing to step into the Trigon and put the titles on the line,” said Valenzuela.

Also in Biloxi, Tony Lopez was crowned the first BYB Heavyweight Champion, controlling Jordan Mitchell for most of the contest before the referee stopped it in the 2nd. Lopez will defend his title in Tampa against DJ Linderman. Linderman earned the shot after an impressive 4th round TKO over Josh Burns this past August.

More fights will be announced in the coming weeks.

To download the Stadium app or to find out how and where else to view, visit watchstadium.com/where-to-watch.