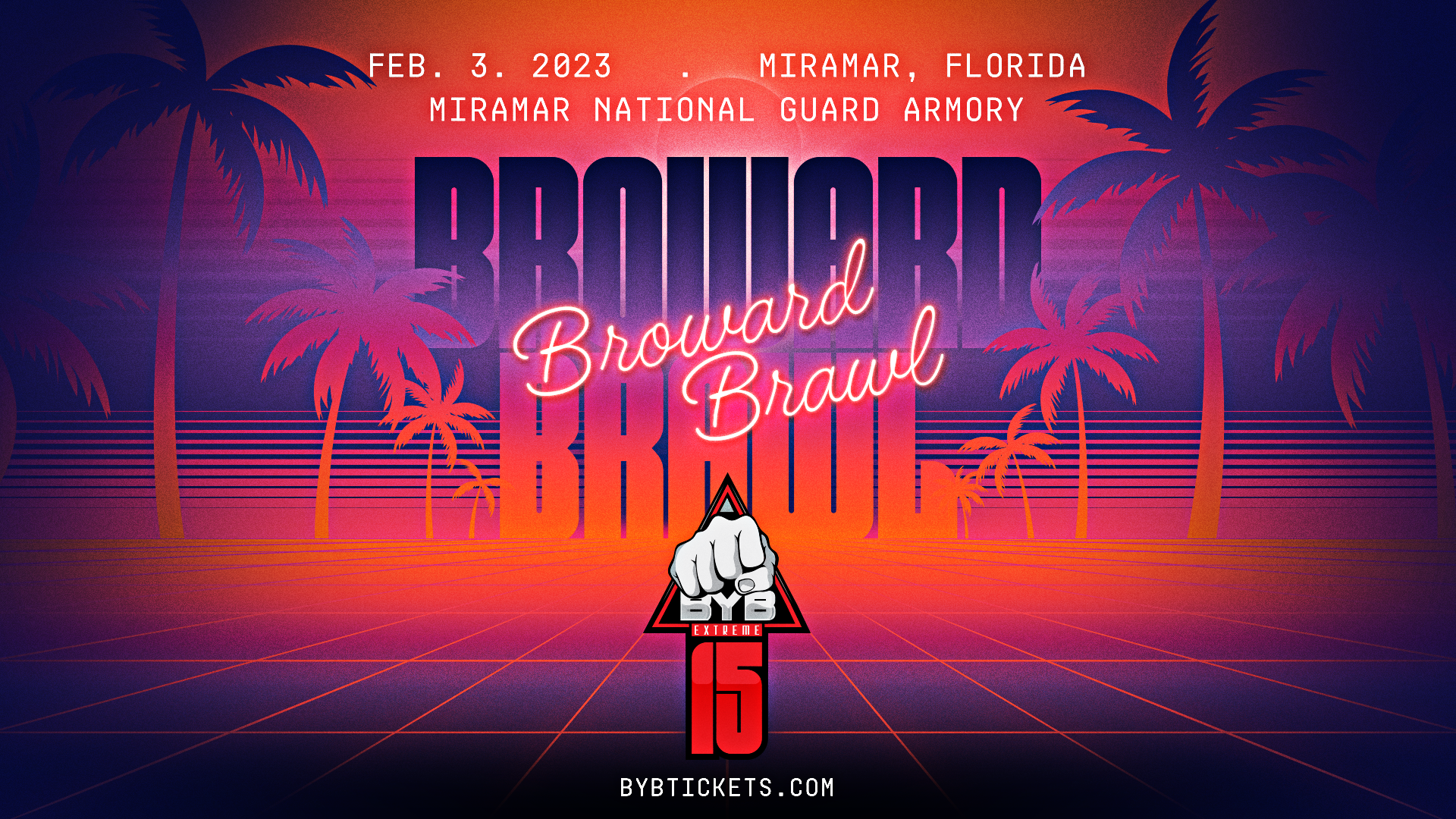 Miami, FL – Born in the backyard of Dhafir “Dada 5000” Harris at his renowned Greenhouse in West Perrine, developed by visionary Miami businessman Mike Vazquez, and now lead by combat sports veteran Gregory Bloom, the Miami-based BYB Extreme Fighting Series announced today a number of initiatives slated for 2023 on the heels of its historic 2022.

Bloom, who took over CEO duties this past September from Vazquez, announced today that BYB will open its 2023 campaign at the Miramar National Guard Armory on February 3, and laid out plans for subsequent events.

Said Bloom, “2022 was an incredible year for our company, and 2023 is already looking to dwarf those accomplishments.  After our kickoff at home in South Florida this February, in the first half of 2023, BYB will put on a pair of international shows on two separate continents, an exhibition in a new state and in one of the country’s top DMAs, and roll out a handful of disruptive partnerships that are sure to realign the fight sports landscape.”

Since 2015, BYB has created a blueprint for upstart combat sports to position themselves for mainstream popularity, without sacrificing the lessons learned via its community-based roots in poverty-riddled West Perrine.

“In those early days,” Harris says, “the backyard was a way for the community to come together in a healthy and respectful way.  We harnessed aggression and frustration that was festering in the neighborhood and turned it into a positive. Whether we are in South Florida, Carolina or London, that attitude and commitment continues today.”

Said Vazquez, “The sport comes first. From top to bottom, our leadership team is composed of individuals with a track record of success and respectability in sports, entertainment and business. Taking cues from Dada’s early days at the Greenhouse and lessons learned from decades of experience, BYB has developed its own home-grown stars, taking a slow, long-term and strategic approach to roll-out and growth, and is positioning our brand and talent to flourish for years to come.”

He added, “BYB matches are built to bring out the best in competitors and, in turn, the sport.  Spectators leave our shows knowing they were at a genuine sporting event with bonafide athletes. The quick, action-filled rounds and matches in the smallest fighting surface in combat sports are structured to leave viewers – in the arena or watching around the world – entertained.”

With the full-time involvement of Bloom, who previously served as BYB’s counsel and has almost 20 years of combat sports experience, BYB is committed to positioning itself as not just a leader in bare knuckle fighting, but in combat sports.

Among 2022’s historic highlights alluded to above, BYB:

Said Harris, “Each year and each show builds upon those before it and the foundation we laid right here in Miami.  We are committed to doing the very best by our competitors, fans and partners, and I couldn’t be more proud of the legacy we are building and the history we are making.”

Bloom is a partner at the sports and entertainment law firm of ChaseLawyers and has almost twenty years experience in the world of combat sports. During that time period, he has represented multiple Olympic medalists, top-ranked fighters and world-champions in both boxing and MMA, and has helped them negotiate lucrative agreements with entities such as UFC, Bellator, Strikeforce, Top Rank, Matchroom, Probellum and PBC. He also worked for nine (9) years as general counsel for world- renowned MMA organization Combate Global, and during that time assisted them in their securing of major media deals with internationally recognized television and streaming platforms such as ESPN, Univision, Telemundo, Televisa, NBC Sports and Eurosport.  Additionally, Mr. Bloom has also worked as a licensed promoter for the past six (6) years, and he has successfully promoted over seventy (70) live events throughout the world.

Miami, FL – BYB Extreme Bare Knuckle Fighting Series founder and President Mike Vazquez announced today that Gregory Bloom has been appointed CEO of the groundbreaking bare knuckle boxing organization.  Bloom will take over day-to-day operations and duties from Vazquez, and focus on major growth and partnerships already slated for BYB in 2023.  The move does not diminish Vazquez’s role in the organization, but rather will enable him to focus on big picture issues and opportunities moving forward.

Bloom is a partner at the sports and entertainment law firm of ChaseLawyers and has almost twenty years experience in the world of combat sports. During that time period, he has represented multiple Olympic medalists, top-ranked fighters and world-champions in both boxing and MMA, and has helped them negotiate lucrative agreements with entities such as UFC, Bellator, Strikeforce, Top Rank, Matchroom, PBC and Probellum. He most recently worked for nine years as general counsel for world- renowned MMA organization Combate Global, and played a critical role in their securing of major media deals with internationally recognized television and streaming platforms such as ESPN, Univision, Telemundo, Televisa, NBC Sports and Eurosport.  Additionally, Bloom has also worked as a licensed promoter for the past six years, and he has successfully promoted over seventy live events throughout the world.

Says Vazquez, “I have known Greg for several years and he was an integral part of BYB’s successful 2022 calendar year, including advising the company on its market expansion, global partnerships, and broadcast opportunities.  As we approach 2023, those successes have greatly accelerated, and we need someone with Greg’s character, experience and expertise to help us navigate.”

Says Bloom, “My immediate goal is to make BYB the number one sports property in the bare knuckle space.  What Mike, Dada [co-founder Dhafir “Dada 5000” Harris] and the rest of the team have built to date, through multiple shows and months of hard work and dedication is an amazing testament to their ambition and vision, and they’ve done so while striving to put their fans and fighters first.  I’m here to build on that foundation, and to turn BYB into the premier bare knuckle company in what will become the next globally recognized, billion dollar sport.”

BYB 12: London Brawl will be held October 16 at The Indigo at the O2 in London.  BYB 13 will be held at the Florida State Fairgrounds in Tampa. Tickets for both are now available at bybtickets.com.