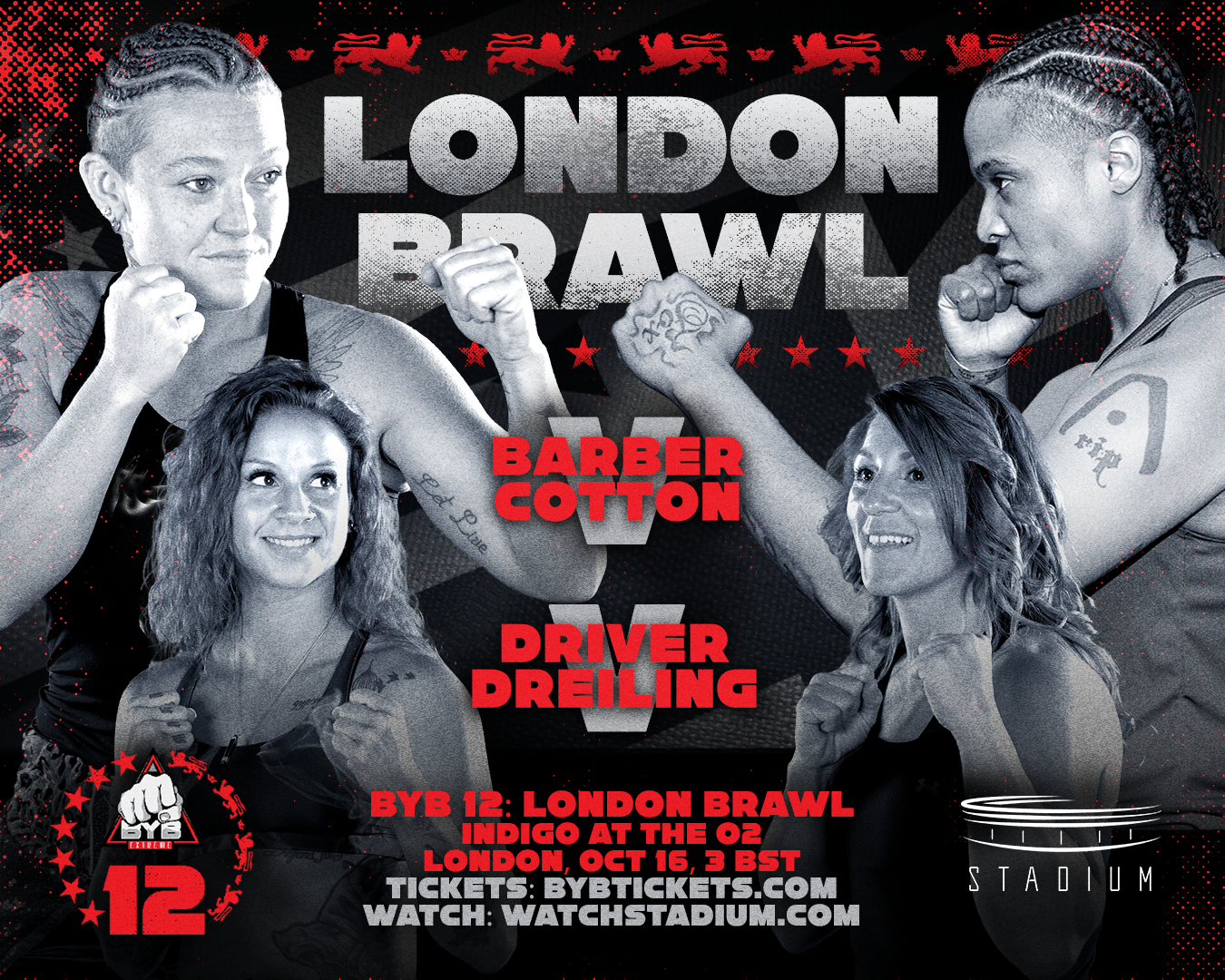 London, UK – As BYB Extreme makes its UK debut on Sunday, October 16 at the Indigo at the O2, it will also make combat sports history by featuring a pair of professional women’s bare knuckle fights – the first (and second) in UK’s history.

On the card, Jozette Cotton (Omaha, NE) and Miranda “She Hulk” Barber (Boca Raton, FL by way of Lansing, MI) will face off for the inaugural BYB Women’s Welterweight title and the Police Gazette Diamond Belt – the first women’s bare knuckle championship fight in the UK.

In the undercard,  Jamie Driver (Boca Raton, FL by way of Pennington, NJ) and Sonya Dreilling (Albertville, AL by way of Greeley, CO).

Over the past year, BYB has put an emphasis on signing high-quality female talent to the promotion and featuring them in high-profile matches on BYB cards.

Said matchmaker Mel Valenzuela, “While other promotions see women matchups as afterthoughts, or worse, sign novice fighters in exchange for their large social followings or superficial appearance, we have built a roster of championship-caliber fighters worthy of headlining our cards.”

In addition to making UK history, Valenzuela points out that champion Paty Juarez, the first-ever champion in BYB history, and Monica “Phenomemom” Medina previously headlined a card this past May in Biloxi, and will once again do so next month at BYB 13 in November.  “Pink Tyson” Kallia Kourouni and Jessica Link headlined August’s BYB 11 Brawl in Doral.  This past year, BYB brought on Jewlz Grey as Women’s Division Coordinator to further strengthen and develop the female roster and matchups.

Said Grey, “BYB is fully committed to putting on the best fights in not just bare knuckle, but all of combat sports.  No gimmicks. No shortcuts. Man, woman, if you can fight, we want you to do so in the Trigon against someone equally as skilled and hungry.”

BYB 12: London Brawl will take place live at the Indigo at the O2 in association with its bare knuckle alliance partner BKB on Sunday, October 16, 2022 at 3 PM BST (10 AM ET).  Tickets are available at bybtickets.com.  The fight will be broadcast live and exclusively on Stadium’s over the top (OTT) and over the air (OTA) platforms.  To download the Stadium app or to find out how and where else to view, visit watchstadium.com/where-to-watch.

The October 16 card will feature a series of BYB vs. BYB matchups, as well as BKB vs. BKB and BYB vs. BKB cross-promotional bouts. Over a dozen fights are slated for the card including the main event for both the BYB Welterweight Title and the Police Gazette World Diamond Belt between Carlos “El Diamante” Guerra and Seth “The Body Snatcher” Shaffer.   Both bare knuckle brawlers are undefeated in the division.